The oil palm tree has ancient roots. Also known as Elaeis Guineensis, the oil palm first grew wild in West Africa where it has been used as a food and energy source for millennia. The discovery of an earthenware jar containing residues of palm oil, in a 5000-year-old tomb in Abydos in Egypt, showed that even the Ancient Egyptians used the golden crop.

Oil palms were first introduced to Malaysia as an ornamental plant in the 1870’s and later it was developed into an agricultural crop and the first commercial plantings were initiated in 1917.

Today, Malaysia is the world’s largest exporter of palm oil, contributing to 27% of the total export trade of oils and fats globally. The country is the second largest producer of palm oil, after Indonesia, with an annual production of close to 18 million tonnes of palm oil.

The oil palm is the most efficient oil-bearing crop in the world, requiring only 0.26 hectares of land to produce one tonne of oil while soybean, sunflower and rapeseed require 2.22, 2 and 1.52 hectares, respectively, to produce the same.

In fact, oil palms stand for 31% of the world’s production output of fats and oils, but using only 1% of the world’s total planted agricultural area. This makes palm oil one of the most sustainable solutions when it comes to feeding the growing world population. 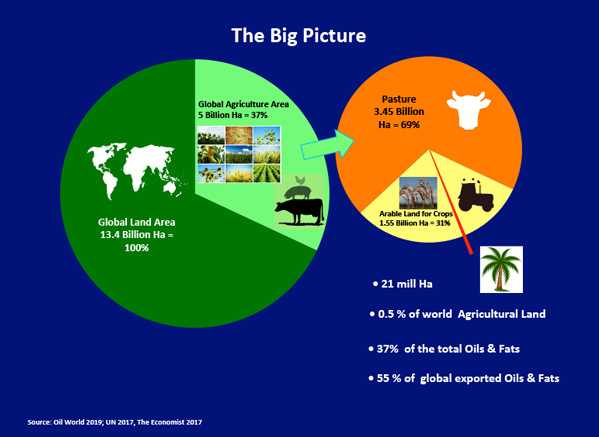 All rights reserved. Unitata is a registered trademark and part of UP - United Plantations Berhad. Terms condition, features, availability and general are subject to change without notice.